It’s star-crossed lovers courtesy of Shakespeare, but it’s not set in fair Verona. Although the Actors’ Shakespeare Project’s production of "Troilus and Cressida" is confident and energetic, it’s ultimately a frustrating evening because of the play’s inherent weaknesses. If director Tina Packer could have massively edited Shakespeare to focus on the rich comedy she mines, though, this could have been a shorter and more satisfying show.

"Troilus and Cressida," drawn a bit from the Homeric description of the Trojan War and more so from a medieval story of the title characters, is one of Shakespeare’s "problem plays". Problem as in "what societal problem or characteristic is the playwright commenting on?", but also problem as in "this play isn’t emotionally involving enough to be one of the tragedies nor full-on funny enough to be a comedy and that’s quite a problem for the director."

Troilus (a nicely intense Maurice Emmanuel Parent) is a prince of Troy, the city to which the Greeks are laying siege, because Troilus’s brother Paris snatched the infamous Helen from Menelaus of Greece.

Troilus has the hots for Cressida (an earnest and contemporary-seeming Brooke Hardman), who returns his affections and the two share a night of passion. In between the wooing and the lovemaking is much scheming on the part of the Greek commanders, who are trying to get the hero Achilles (De’Lon Grant) off the bench and back in the fight, and policy discussions between Troy’s King Priam and his sons on whether this war is still worth fighting or if they should return Helen and hope the Greeks go home. When these leaders make pawns of the lovers by gifting Cressida to a Greek commander in exchange for a Trojan prisoner, Troilus and Cressida’s dedication to each other is challenged. 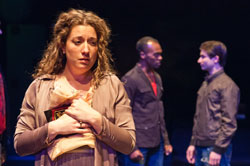 Oh, that it were only that straightforward. Yes, the business with playing Achilles’ vanity against fellow Greek Ajax’s ego is a hoot and half. Johnnie McQuarley is splendidly brutish, block-headed and in love with himself and his biceps. The quartet of Robert Walsh as Agamemnon, Steven James DeMarco as Menelaus, Craig Mathers as Ulysses, and particularly Bobbie Steinbach gender-bending it as Nestor are a riot in their scheming and flattering. All but Mathers pull double-duty as Trojans too, with delightfully distinct characterizations, again a tip of the hat to Steinbach’s palsied Priam.

Walsh’s portrayal of Pandarus, Cressida’s uncle, as a sybaritic Trojan by way of Damon Runyon also makes for great comic moments, all of which make the Shakespearean text fresh and modern. Packer’s comedic "Troilus and Cressida" might easily be a new reality show, "The Real Soldiers of the Trojan War," a co-production of CNN and Bravo.

But all this plot and all these characters, render the script diffuse and with no clear protagonist. We leave the title couple for nearly an hour during the butt-numbing expanse of Act One. Then in the second act, Shakespeare turns the play from a whole lot of talking to not much delivering on what’s been said. There’s the anti-climatic battle between Ajax and Trojan prince Hector, a less than heroic attack on Hector by the hero Achilles, and Cressida’s proclamations of fidelity to Troilus are up-ended (although with good reason for a woman alone in an army of randy Greek soldiers). 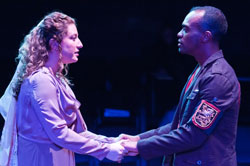 The tale of disappointment and an endless war kept up only because the leaders seek to maintain their honor must have seemed temptingly relevant to the ASP. Packer and her production staff do their all to draw the audience into the show, from the more modern costumes from several eras by Kara Midlam to the in-the-round scenic design from David Wilson, making a lot with a few pieces and some well-placed set decoration. Capable, energetic, appealing performances abound, whether from the leading players or the utility infielders, like Paige Clark, playing nearly every woman in Troy and to best effect Cressida’s squealing servant Alexandra.

But the unfocused script fails the production. If the playwright can’t seem to settle on which characters he wants to spend time with (are Troilus and Cressida, the scheming Greeks, the preening Ajax, or the contemplative, dramatic Priam and his sons Shakespeare’s focus?), why should the audience care about any of them? The actors loudly proclaim, passionately entreat, bombastically orate, but there’s an emotional distance between the action and the audience that the most skillful performer or the dandiest fight scenes (courtesy of winner of "best job title of all time," violence designer Ted Hewlett) cannot bridge.


"Troilus and Cressida" continues through May 20 at the Modern Theatre at Suffolk University in Boston. For more info you can go to the company’s website.