Boston's actors prepare for their roles in the fall theatre season

Most of us have been spending our summers scarfing down lobster claws and luxuriating by overcrowded pools. But for a select sect of Boston performers, seasonal hedonism has taken a backseat to script readings, makeup consultations, and stage rehearsals stretching into the wee hours. The 2012 fall theater season is at our doorstep, and to mark the occasion, we chose three of the Hub's hottest upcoming shows and had a heart-to-heart with a trio of talented cast members: in-person, and in-character. Read on, and get ready for some serious close-ups. 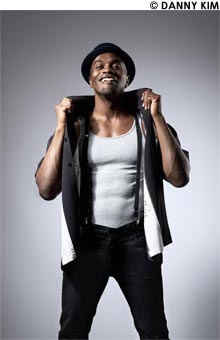 Had you traipsed through Boston Common this summer, you might have caught Maurice Parent channeling the Bard's Tullus Aufidius in Coriolanus. But the Boston-based actor's stage career almost didn't happen. Originally a business major at Carnegie Mellon, it wasn't long before Parent found himself frequently skipping finance lectures for ballet classes in the university's theater department. Since becoming fully committed to the stage, he's taken turns in local productions of Rent, Man of La Mancha, and Angels in America. This year, he'll portray parole officer Ralph D. in The Motherfucker with the Hat. As Ralph, he told us that he's got a lot on his mind: for example, sponsoring a formerly incarcerated drug dealer named Jackie at Alcoholics Anonymous.

SO HOW DID YOU AND JACKIE FIRST CROSS PATHS? WHAT WAS YOUR INITIAL IMPRESSION OF THE GUY? Jackie and I met at an AA meeting in a church basement in midtown Manhattan about two and a half years ago. It was his first time coming to this particular group meeting, but as soon as he walked in, I could tell right away that I "knew" this dude. My intuition was soon backed up as he started opening up about his life. We had similar backgrounds, and, in fact, we grew up in neighborhoods right next to each other. He had tried AA before without much success, but was determined to get clean for his girlfriend.

I HEAR THAT WHEN YOU GAVE UP BOOZE, YOU FILLED THE VOID WITH VEGETABLE JUICE AND SPORTS DRINKS. WHAT SPURRED THE SWITCH? Well, when I first committed to living a sober life, I found myself using other non-alcoholic substances to satisfy my addictive nature. At first it was drinking a lot of caffeinated beverages; but one day I was talking to my wife, and my head kept bouncing up and down, left and right, like a Ralph D. bobblehead. So that wasn't going to work; and since I was getting older, I decided to research ways to preserve my sexy, youthful self. And since I couldn't afford microsurgical hair transplantation, I went with natural foods.

NOW, AFTER A LONG DAY OF DEALING WITH YOUR SPONSEE, HOW DO YOU LIKE TO UNWIND? I'm pretty boring, actually. I sit up and watch whatever silly television programming my wife has on at the moment. If we're home together in the afternoon, we're usually watching woman after woman being told by Maury Povich that "He is NOT the father." In the evenings, it varies between sexy vampires and "real" housewives. Other than that, I do a lot of yoga at the local Y, and yo, my practice is getting dope! The other day I did my first unassisted headstand, and I celebrated with a carrot-and-ginger-root smoothie. It was a beautiful day.