Rockin' search for self gets 'Passing' grade 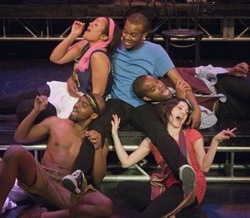 By Daniel Gewertz
The Boston Herald - Wednesday, May 4, 2011

“If I were any more real I’d be fictional.”

That line belongs to Franklin, flamboyant mentor to Youth, the hero of the Tony award-winning Broadway hit “Passing Strange.” It seems like a joke at first. But this rock musical about a young black man, and his search for “the real,” gains some authentic pain and confusion by the end.

Over and over, Youth searches for his real identity, abandoning his mother and his middle-class life for the wilds of Europe and artistic radicalism. Alas, love and honesty fall victim to his search for real self and real art.

For a variety of reasons, “Passing Strange” is a hard show to pull off. Its rock and soul score makes daunting demands of cast and band. The definitive Broadway version was filmed by Spike Lee and is readily available on DVD. And the original version had “Passing Strange” creator Stew in the lead role of “The Narrator.”

There’s no Stew in the New Rep production. The part just becomes less central. The cast gets a passing grade, but while this version of “Passing Strange” is enjoyable, its punch and power isn’t quite, well, real enough. Director Kate Warner does a nice job, but nice isn’t sufficient.

But the casting goes awry when it comes to the roles of the young women in Youth’s life. Marianna (Eve Kagan, who plays two other roles) and “left-wing love machine” Desi (Kami Rushell Smith, also multiple roles) just don’t muster enough sexy chemistry. Kagan has comic appeal, but she flattens each of her roles to two dimensions. Smith has the best voice in the cast, and is magnificent in the searing “Come Down Now.” She gets the emotion, too, but is neither goddess nor force of nature.

The production captures Stew’s wit and humor, but shortchanges his passion and intellect. In this “Passing Strange,” the search for the real gets lost.