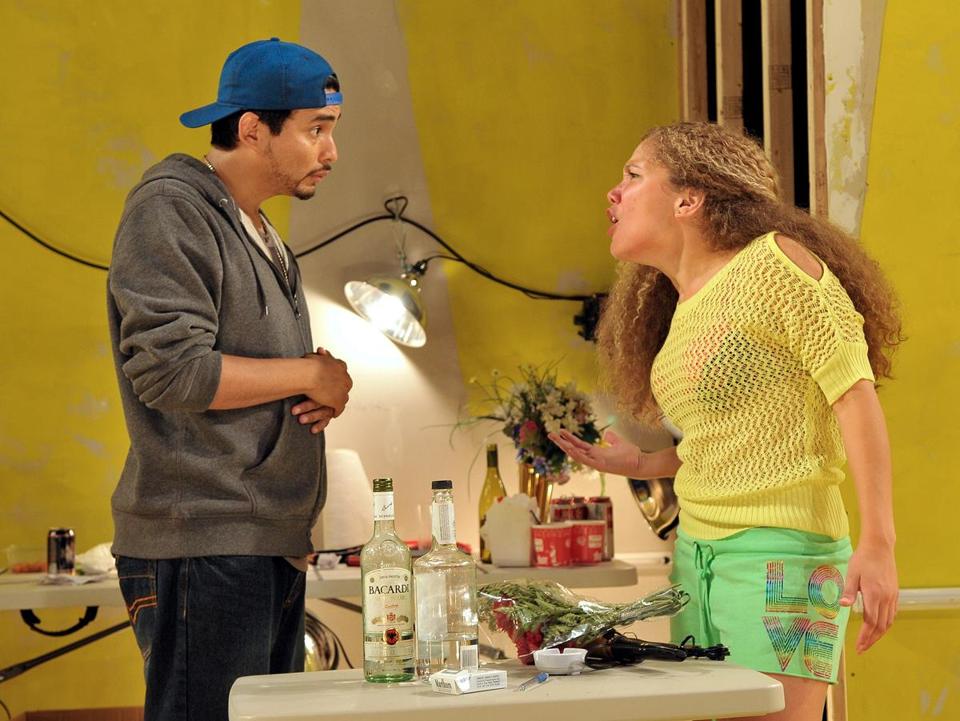 For one major thing, when Jackie surprises his girlfriend Veronica with flowers, a little stuffed bear, and the big news that he has landed a job (the legal kind), he discovers an unexplained man’s hat on a chair.

It’s a very bumpy ride for Jackie from that point on — and a satisfying one for connoisseurs of crackling dialogue and skilled acting like the kind on display in SpeakEasy Stage Company’s first-rate production of “The [Expletive] With the Hat,’’ directed with propulsive force by David R. Gammons.

Gammons, who helmed “Red’’ at SpeakEasy last season, sustains an air of scorpions-in-a-bottle tension, mystery, and incipient chaos throughout “Hat,’’ a sense that one wrong move could prove the undoing of people who are all too accustomed to making wrong moves.

As with many love stories, Guirgis’s play revolves around a desire for second chances. Having just wrapped up a two-year prison stint, Jackie (Jaime Carrillo) is trying to stay straight and sober, with the help of his friend and Alcoholics Anonymous sponsor, Ralph D (Maurice Emmanuel Parent). However, Veronica (Evelyn Howe) is still using drugs. Ralph tells Jackie he’s better off without her, that Veronica’s apparent infidelity is part of an addict’s “cycle of self-sabotage.’’

Of course, Jackie has his own checkered history when it comes to both self-sabotage and unfaithfulness. Still, his impulse is to get a gun and go after the guy with the hat, which would represent exactly the kind of backsliding into criminality that the sensible part of him is determined to avoid.

Carrillo draws us into Jackie’s struggles, though playing this role in the aftermath of Bobby Cannavale’s molten performance on Broadway is a bit like playing Stanley Kowalski after Brando. Yet just as Brando’s sexual charisma obscured Stanley’s brutishness, Cannavale’s good looks, physical stature, and galvanizing presence may have diminished Jackie’s aura of vulnerability. By contrast, Carrillo’s Jackie seems like the underdog in any encounter, all his bluster notwithstanding. From the moment Jackie spots the telltale hat, he wears an expression of perpetual anxiety, as if he knows he’s just a bit over his head, just a beat behind, neither smart enough nor dishonest enough to keep up with the others in his orbit.

Howe, so superb last season in “Arabian Nights’’ at Central Square Theater, beautifully captures not just Veronica’s tough-talking fearlessness but also the part of her that is brokenhearted, wondering what happened to the dreams she built on Jackie’s promises: going back to school, getting married, having children, living in a house in Yonkers.

Melinda Lopez brings an air of wised-up bitterness to the role of Victoria, Ralph’s wife; years of disappointment are evident in Lopez’s face and her movements. Alejandro Simoes is very funny as Jackie’s cousin Julio, outwardly fastidious and delicate but ever ready to unleash his inner Jean-Claude Van Damme on Jackie’s behalf. Julio is the most together, fully functional person in “Hat.’’

But the single most compelling presence onstage is Parent’s Ralph. This fine actor, seen most recently in Commonwealth Shakespeare Company’s “Coriolanus,’’ delivers a magnetic, insightful performance that explores, as Chris Rock did not on Broadway, all the corners of the multifaceted riddle that is Ralph. He is a man whose sheer intelligence, facility with words, and proven ability to conquer his own substance abuse have left him with a feeling of absolute power — and we know how corrupting that can be.

Don Aucoin can be reached at aucoin@globe.com.