One Funny 'Motherf**cker With the Hat' 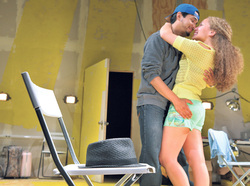 SpeakEasy Stage Company walk the fine line between humor and pain with extraordinary precision in a brilliant pro- duction of "The Motherf**ker With the Hat."

Just beneath the surface of the funny, biting words of playwright Stephen Adly Guirgis' lies raw human desperation that turn this riotous story into a compelling treatise on love, addiction and human nature.

Each of the five characters seek relief from their rough lives in some form of addictive behavior. Drugs, alcohol, nutrition, sex and 12-step programs fuel the chaos that simultaneously unite and divide this desperately sad slice of humanity.

Evelyn Howe reels you in with great comic timing as Veronica, the active addict with no intention of stopping. Her sassy delivery wins you over initially, but it's a haunting look of desperation and emptiness that breaks your heart in the end.

Maurice Emmanuel Parent nails every slimy nuance in his flawless portrayal of an A.A. guru with the spirituality and probity of a snake oil salesman. Alejandro Simoes adds great levity and the only touch of true humanity with his portrayal of sexually ambiguity.

Though Jaime Carrillo's character declares "I'm in f--ing pain" early in Act 1, you can't imagine the depth and breadth of pain he reaches at the crescendo of his amazing performance. Melinda Lopez takes a more subtle approach, but her pain is equally palpable and her performance also stunning.

“The Motherf**ker With the Hat” is the story of an ex-con’s effort to start a new life in sobriety. The problem is his long-time girlfriend is a coke addict with issues of her own. This production contains strong language and brief nudity.

Picture: Evelyn Howe, right, gets close with Jaime Carrillo, who could be the title character in “The Motherf**ker With the Hat.” CRAIG BAILEY / PERSPECTIVE PHOTO