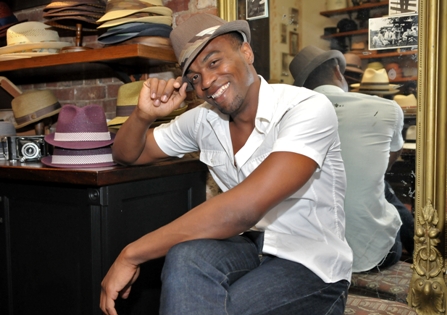 To prepare to play the role of Ralph D in the SpeakEasy Stage production of The Mother**ker With the Hat, Maurice Emmanuel Parent did a lot of indepth, intensive research. His character was a recovering alcoholic, so he went to AA meetings and talked to recovering alcoholics. He read the Big Book, the AA bible. Although he doesn’t suffer from the same disease as his character, Parent could identify with the compulsive behavior that an addict. He saw how alcohol filled a void in the addict’s life, and imagined what it must be like to have such a void, such a need.

He did all the work he could, learned as much as he could and, when it was time to start rehearsing the show with his fellow actors, he tried his best to forget it all.

“The work was important, but I wanted it to be part of Ralph’s history, part of his past that influenced how he reacted to things as the play progresses each night,” Parent explained. “A lot of the character is on the page – it’s a very well-written work (by Stephen Adly Guirgis) – but it’s the kind of part that you can change every night depending on the  energy you have and intensity you and the other actors bring to the stage on any given night.”

Although he jokingly says it’s something that actors like to say about every production they are in, Parent is serious when he says that the bond that the cast has formed between each other during rehearsals is what makes the play feel so in-the-moment  night after night. And it’s a bond that he says gets stronger with each performance.

“The friendships we’ve made outside the theater are vital to the show,” he said. “And it’s not about us sitting down night after night and dissecting each performance either. We’ve gotten to know each other as people, as friends, and that’s given us the strength to trust each other implicitly during that time we are doing the show. I can feel it in every scene. I may know what the other actor is going to say next, but I don’t know how they will say it or how I will react. We’re alive up there. The energy is amazing, and the audience can feel it.”

“The Motherf**ker with the Hat runs through Oct. 13 at the Calderwood Pavilion at the Boston Center for the Arts, 527 Tremont Street. Ticket prices range from $25-$57 with discounts for students, seniors, and persons age 25 and under. For tickets or more information, the public is invited to call 617.933.8600 or visit www.SpeakEasyStage.com.

Click here to read the article on Boston Events Guide