In "The Motherf**ker with the Hat," Ralph D, an AA sponsor played to a tee by Maurice Emmanuel Parent, has a compelling agenda; but is it keeping the newly sober Jackie on point?

A 2011 Tony nominee for Best Play, Stephen Adly Guirgis’ ferociously funny play centers on Jackie, an ex-con who thinks he has turned his life around now that he’s sober and has a new job. But when he finds a hat (not his) in the apartment he shares with Veronica, his girlfriend, he’s on the brink of losing his sobriety. To prevent this, he moves in with Ralph D, then sets out to find out the identity of the man with the hat.
The bold comedy, currently in its Boston premiere by the SpeakEasy Stage Company, continues to critical and popular acclaim at the Boston Center for the Arts through October 13, 2012.

EDGE spoke to Parent recently about portraying the complicated Ralph D who at one moment in the fast-paced story emerges full-frontal after taking a shower. 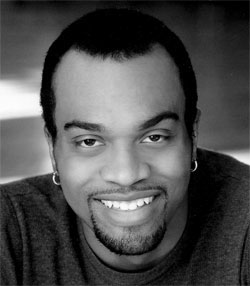 EDGE: What is your comfort level of being naked on stage?

Maurice Parent: As soon as I got the role, I renewed my gym membership!

Earlier in my acting career I would not have had the confidence to be naked on stage but as time has passed I’m more accepting of everything about myself and so I have been able to get through that moment with no problems.

David Gammons the director made it clear that whatever I was comfortable with - being back lit, wearing a towel, being naked - that would be O.K. You know what? The truth of the moment is that he is coming out of the shower.

EDGE: The role was originated by Chris Rock who apparently played it in a more comedic, warmer style. Why did you turn to the darker and less sympathetic side than portrayed in the past?

Maurice Parent: I actually didn’t see the production in New York and really wanted to develop the character separate of what was done there, and with a play this well written so much character information is given to you in the script. Chris Rock is one of the funniest men in America, and if that’s the aspect of Ralph he focused on I’m sure it was wonderful. When I read the script, both the comedic and darker aspects of Ralph D. seemed interesting to me and I wanted to explore both of them equally.

When I first read the script what hit me was everybody’s desperation and need, and also I laughed out loud.

My day job is teaching elementary school, pre-K through 8th grade theater arts at the Martin Luther King, Jr. in Dorchester. I knew with the coarse language that the characters use that there weren’t going to be any student matinees for this show, so I didn’t have to worry about that and could go full out.

EDGE: In the play’s climatic confrontation, you say words to the effect that "I’m not perfect but I am 15 years sober (whatever my defects)." Was that an important angle for you in developing the character?

Maurice Parent:This was a very important angle in developing this character and I really appreciate the question. One of the great things SpeakEasy provided to the cast was the opportunity to attend an AA meeting and to speak with people going through the program. This was such a rich opportunity and helped me better understand the world of this play and the language that Guirgis’ characters use.

To me, this line speaks to something I learned at the AA meeting about being a ’dry drunk.’ This means that although you have stopped drinking, you have done nothing to deal with the inner demons that drove you to abuse alcohol in the first place. I feel this is at the core of Ralph. He may not have gotten high or had a drink in 15 years, but he hasn’t done the work to address the inner feelings of being ’wrong’ that is at the heart of the disease of alcoholism. As a result he tries to fill the void inside with destructive, chaotic behavior.

EDGE:Do you know people like Ralph D.? Are they only found among recovering addicts? I see him as the central character, even though the storyline is a romance between Jackie and Veronica. For me, it’s as if the playwright needed a plot to hang a character study on. . Do you?

Maurice Parent: I personally don’t know anyone that is exactly like Ralph D but I have met people that have some of his characteristics. I know people who, for instance have experienced being a counselor and use those skills as a way to manipulate or influence others.

I also know people who have gone or are going through addictions and I have witnessed their compulsive personalities. I fully see the interpretation of Ralph as the central character and in my actor’s mind: it’s definitely a story about an AA sponsor named Ralph. However ultimately I think it’s an ensemble piece that’s being driven along by Jackie. To me it’s his reactions to the acts of the "Motherf**ker with the Hat" that puts the play in motion. I think that’s a tribute to the brilliant playwriting that people walk away with different and valid opinions of who the central character is. 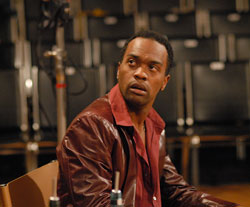 EDGE:Have you personally dealt with recovery from any kind of addiction such as cigarette smoking and did you take anything from that in developing Ralph D.

Maurice Parent: I haven’t dealt with addiction in my life. I briefly was a recreational (cigarette) smoker (I was a server at a restaurant and smoked during breaks), but the heaviest I got was maybe a pack lasting me 2-3 weeks. I have seen the toll it can take on the person himself and his family.

What I do personally take away from developing Ralph D are aspects of his mental state.

EDGE: Is Boston fertile for you as an actor?

Maurice Parent: Absolutely! I’ve said it before, working in Boston changed my life. Every time I’d decide to finally give up acting I would get a call from a Boston theatre inviting me to attend an audition. I would end up getting cast in the show and by the end be reminded of how much I love what I do. I feel that in this town I’ve been afforded so many amazing opportunities to explore different aspects of myself as a performer that I wouldn’t get anywhere else. I’m so grateful to be here.

EDGE: How are audiences responding to Ralph D. in the sense do you find yourself playing him at all differently from night to night?

Maurice Parent: Audiences have been amazing. I always want to stay true to the character we developed in rehearsal and things like the blocking and fights stay the same, but with it being live theatre it does change in some ways from night to night, and the energy from the audience has a lot to do with that. Theatre in my opinion is a conversation between the actors and the audience, and both are equally important in making the theatrical experience happen.

EDGE: Whose idea was it to have the cast stand and stare at the audience at the start of the play and was it said what was the point?

Maurice Parent: It was the idea of the director David Gammons to do that, it goes along with the style we are presenting the piece in. At the top of the show he wanted us to come out not as our characters, but as ourselves - the actors playing the characters. It’s also why you can clearly see us making the scene changes and why there is little to no masking on the sides of the set. He went with a Brechtian approach of storytelling, where the audience see that we are not trying to hide that fact that we are actors working together to tell this story in an unspecific space. We adopt the characters when we are in scenes.

EDGE: The playwright has said about his inspiration that AA is a perfect program but the people in it are not. Comment.

Maurice Parent: When I hear that quote I think of how the steps and lessons discussed in the meetings are perfect but it’s impossible to ever attain that level of perfection, since we are human and flawed. That’s probably why regular attendance at meeting is vital so you can strive to get closer and closer to that perfection. Also it seems it’s the addressing of your imperfections in AA meetings that lead to recovery.