A Show To Take Your “Mother” To

Get a “Hat” attack at SpeakEasy September 14-October 1 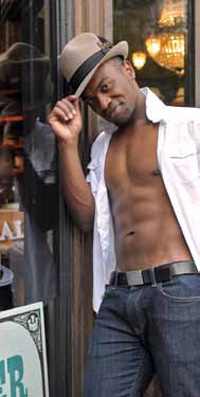 With its Puritanical roots still showing in many ways, Boston may be the last place you would expect to see a show with profanity right in the title.
Fortunately, we have a strong company like SpeakEasy Stage to push the envelope. Having staged such risque shows as the peeyourself- funny “Urinetown,” the moving “Vibrator Play” and the psycho-phamacological “Next to Normal,” SpeakEasy (www.speakeasystage. com) has never shied away from popular shows, despite what the Brahmins might say. As a result, they have continued to bring hit after hit to Boston and even spawned some new shows themselves.
The latest triumph-in-the-making is the Boston debut of “The Motherf**ker with the Hat” which will open September 14.
TMFWTH is the story of an ex-con named Jackie who is trying top put his life back together after time in the cooler. Sober and employed, he seems to be on the right track, until he finds a strange hat in his girl’s place and goes on a riotous rampage to find the titular owner. The 2011 Tony-nominated comedy starred comic Chris Rock in his Broadway debut. Picking up the hat in Boston will be Maurice Parent, a multi-talented and award-winning performer who has performed and made his mark with nearly every Boston company, from Actors’ Shakespeare Project (of which he is a resident member) to Lyric Stage and New Repertory Theatre, as well as the Classical Theatre of Harlem and other companies across the country.
As he has done so much theatre in Boston, Parent is well aware of the social and moral mores here and what this show could do to this town. “I think Boston audiences and, in particular, Speak- Easy Stage audiences will enjoy this play,” he assures, “naughty title and all.” According to Parent, playwright Stephen Adly Guirgis, (whose previous provocative works include “The Last Days of Judas Iscariot” and “Jesus Hopped the ‘A’ Train”), has taken a set of “desperate” characters and “imbued them with so much raw humanity that I think everyone will be able to relate to them.”
When asked more pointedly if Boston audiences will experience any form of shock when they flock (as they surely will) to the show, Parent admits that it is frankly “a tough call.”
“With a title like this, I think people might be disappointed if there wasn’t a bit of an edge to the piece,” he says of this play which is “at times side-splittingly funny, gut-wrenching, and inspirational” and also “hilarious.” “We laugh from the beginning of rehearsal all the way to the end,” Parent recalls. “However, there is so much more to this play. It’s rare that a comedy of this caliber also has so much to say and makes statements that will cut you right to the core. It truly is a masterful work that we are eager and privileged to share with Boston audiences.”
When asked what he is hoping to bring to the play, Parent explains that he tries to bring the same elements of himself to every performance. “I approach every role I portray first as a gift,” he says, quoting his drama teachers who gave him the grounding realization that theatre is competitive and a next role is never guaranteed. “I think I bring openness and curiosity to the role,” he adds. “And with a cast this phenomenal, all I really have to do is react to what they’re doing and I’ll be good to go!”
Though he may see every role in a similar way, Parent is also noted for the personality and presence he brings to each role. Though he has never been involved with any nefarious matters, parent says that he understands how addicts and convicts may see the world and that he tries to bring that perspective to this play. “Often I’ve heard addicts describe their actions as trying to fill a void inside of them,” he explains, “and I think that’s a sentiment many people can relate to. If you are not happy with where your life is, the ways you address that dissatisfaction dictates the direction you life will take. Some use substances to make that change, and others start studying acting!”
As his character is also a bit of a health-nut, Parent smiles and says that he was definitely able to connect at that level. “I also happen to enjoy yoga and health foods,” he says.
If the adult language and themes were not enough, the play also includes full nudity! Fortunately, Parent is brave (and buff) enough to handle that as well. “I’m willing to admit that I have been a more regular figure at my gym lately,” he says, noting that this will be his “debut” as well. “However ,I know the work of director David R. Gammons and thus was confident that moment would be handled with care and respect.”
As he prepares to bare it all onstage for Boston fans, Parent waxes philosophical about the scene here and how he has become a part of it.
“If I’ve learned anything from my years of working in Boston,” he observes, “it’s that audiences here are bold, adventurous, and also very smart. I have faith that, by the end the play, the audience will understand how every potentially shocking aspect of the piece is a necessary part of the storytelling.