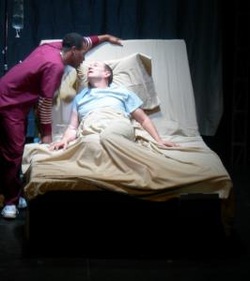 Maurice Parent (left) with Richard McElvain in the second part of Boston Theatre Works' production of "Angels in America." (Nasoj T. Herland)
"Perestroika," the second part of Tony Kushner's epic "Angels in America," is shaggier, stranger, and even more far-flung than its predecessor, "Millennium Approaches." And that's pretty impressive, when you consider that "Millennium" runs about three hours, features characters as diverse as an imaginary travel agent and the ghost of Ethel Rosenberg, and embraces everywhere from Manhattan to Antartica in its sweepingly ambitious saga of American weakness and hope in the age of Ronald Reagan and AIDS.
"Perestroika" picks up where "Millennium" left off - with an angel crashing into the bedroom of Prior Walter, a man whose struggle with AIDS has led his lover to abandon him for a closeted Republican Mormon - and from there, it goes all the way to heaven and back. If the Boston Theatre Works production of Part II doesn't always find the same assured, austere grandeur it nails in Part I, it's nevertheless strong enough, wild enough, and clear enough to carry us through to the play's desolate, quietly encouraging, and profoundly inspiring end.

Codirectors Jason Southerland and Nancy Curran Willis have elicited strong performances in just about every role; they're particularly blessed to have two fine young actors as Kushner's reluctant visionaries: Tyler Reilly as Prior, and Bree Elrod as Harper Pitt, the Valium-addicted wife of the young Mormon, Joe. In "Millennium Approaches" we could already see their confusion and struggle and disbelieving enlightenment; now, as they (and we) are a little more used to the strangeness of it all, we can see their humor, their courage, and their essential goodness. What Reilly and Elrod do best, perhaps, is to show us all this strength while never letting us forget that Prior and Harper, like all of us, are weak and flawed, too - and that it's the ability to keep going anyway that makes us fully human.

These performances give the production a strong core, and that's vital. They receive valuable backup from Maurice Parent as Belize, the sharp-tongued and big-hearted nurse who's able to care both for his beloved friend Prior and his despised enemy and celebrity patient, Roy Cohn. Richard McElvain, too, makes Cohn a hypnotically interesting monster - still sometimes too comic, but more often a captivating horror. And Susanne Nitter, though she seems too cold as Hannah Pitt, finds a satisfying warmth in Ethel Rosenberg's astringent mix of revenge and forgiveness.

I do wish that Boston Theatre Works had given us a more majestic angel. Elizabeth Aspenlieder wonderfully conveys the Angel of America's dry humor, but she should also strike terror into Prior's heart and ours - and, in part because of some too-cute outfits, she never quite reaches that level of awful power. It doesn't help that the ladder she must climb with Prior to heaven - which Kushner describes as an "incredibly bright" shaft of white light, within which is "a ladder of even brighter, purer light, reaching up into infinity," with "flaming alephs" on each rung - is here rendered as a clunky-looking set of steps, in garish Day-Glo hues.

But these are minor irritations, not major disappointments. Perhaps more significant is my sense that this production feels a little too orderly, too visually symmetrical, to convey the sense of searching for a way to rebuild amid the rubble that "Perestroika" demands.

Even so, what's most important, and most worth celebrating, is that a relatively small theater company has had the chutzpah, energy, and talent to take on this vast, vastly important work. Plays are never fully alive unless they continue to be staged. And by giving "Angels in America" this vigorous and invigorating showing, Boston Theatre Works is conferring exactly the blessing that Prior Walter asks of the angels, and benificently shares with us: more life.