'Angels' of grace, depth, and effect 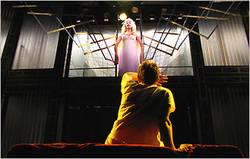 Elizabeth Aspenlieder as the Angel and Tyler Reilly, a recent BU graduate, as a gay man with AIDS. (Nosaj T. Herland)
Stage Review

Epic scope, legendary productions, heaps of prizes, a Mike Nichols film - so much is big about "Angels in America" that, I'll confess, I was a little worried when I heard that Boston Theatre Works was staging Tony Kushner's magnificent two-part epic in a black-box theater at the Boston Center for the Arts. After all that, what could this relatively small local production add to our understanding of the work?

I'll also confess, gladly, that I was wrong to worry. The Boston Theatre Works "Angels" may not be huge. But it is grand.

Nancy Curran Willis and BTW artistic director Jason Southerland are co-directing, as they did on "The Laramie Project" a few seasons back. Judging from Part I, "Millennium Approaches," their partnership is a felicitous one; the production's grace, balance, and depth make me eager to see Part II, "Perestroika," when it opens to the press on Saturday. Most of all, I'm grateful that a local company is taking on this masterful, moving examination of American morality, politics, love, and public life, as illuminated by the darkness of the AIDS crisis in the 1980s. In its exploration of the intersecting lives of its characters - the ailing Prior Walter and his lover, Louis; the young Mormons Joe and Harper Pitt; and Joe's mentor, the closeted conservative lawyer Roy Cohn - this work has a fury and deep humanity that feel as essential as ever.

One reason this production works is that, for all its hugeness of ideas, theme, and setting, "Angels in America" is a quintessentially theatrical work. That is, its great effects call for imagination, not pyrotechnics; its most important explosions reach us through our minds and hearts, not just through our eyes. So while a bigger budget might produce more spectacular images, or cinematic effects could look more "real," the relatively bare stage and the simple tricks used here do just about everything we need them to do.

Laura C. McPherson's set features a series of translucent corrugated panels, which swing silently open to admit the play's assorted angels, ghosts, and other apparitions - each time heralded by lighting designer John Malinowski's artful deployment of black light to create an otherworldly glow. We're not asked to be "fooled" by these magic tricks; we're just signaled to accept them as a sign that magic is happening, that each black-lighted entrance marks a visitation from something outside the natural world.

This works, almost every time. The only exception, unfortunately, is a significant one: the Angel's long-awaited arrival at the end of Part I. This should feel as if a comet has just crashed through from heaven to earth, but instead (after a few uncharacteristically circus-y flashes of colored lights) a partition above Prior's bed simply glides open, revealing an angel decked out in a winglike contraption apparently cobbled together from folding wooden safety gates. Such clearly symbolic wings are probably better than a couple of cheesily fake feathered ones, but the moment as a whole lacks the sense of grandeur and awe it simply must inspire.

That, however, is the only significant disappointment in the nearly three hours of "Millennium Approaches." Yes, I could quibble that the beeping phones in Roy Cohn's first scene go on way too long, distracting us from his interaction with his confused young protégé, Joe, but that's a rare flaw in Nathan Leigh's otherwise excellent sound design. And I could wish that Richard McElvain's Cohn were a little less comic and a little more menacing, but he does seem to be building toward a nastier portrait of evil that may prove to be all the more disturbing because of its initial surface charm.

In other key roles, Sean Hopkins makes a sweet-faced, tormented Joe; Bree Elrod gives Joe's unhappy wife, Harper, an edge of despair and a keen wit that feel just right; Maurice Parent is snappy, saucy, and real as the drag queen turned nurse, Belize, and Elizabeth Aspenlieder finds the right mix of warmth and authority for the Angel. Christopher Webb's Louis is a little too schlubby for my taste, but somehow he makes it work. It's hard to tell yet whether Susanne Nitter's Hannah Pitt (Joe's mother) will grow into her larger role in Part II, but her Rabbi Chemelwitz definitely needs to lighten up on the shtick.

And then there's Prior Walter, whose journey through AIDS and heartbreak forms, with Harper's parallel journey, the vital heart of both plays. Tyler Reilly, a recent Boston University graduate, looks a little too young and not quite chiseled-WASPy enough for the part, but his finely tuned movement, his wry humor, and most of all his beautifully expressive voice soon won me over. "Angels in America" needs a Prior Walter who can take us along with him wherever he goes, and in Reilly this "Angels" has one. That's worth a million-dollar special-effects budget any day.

Louise Kennedy can be reached at kennedy@globe.com.